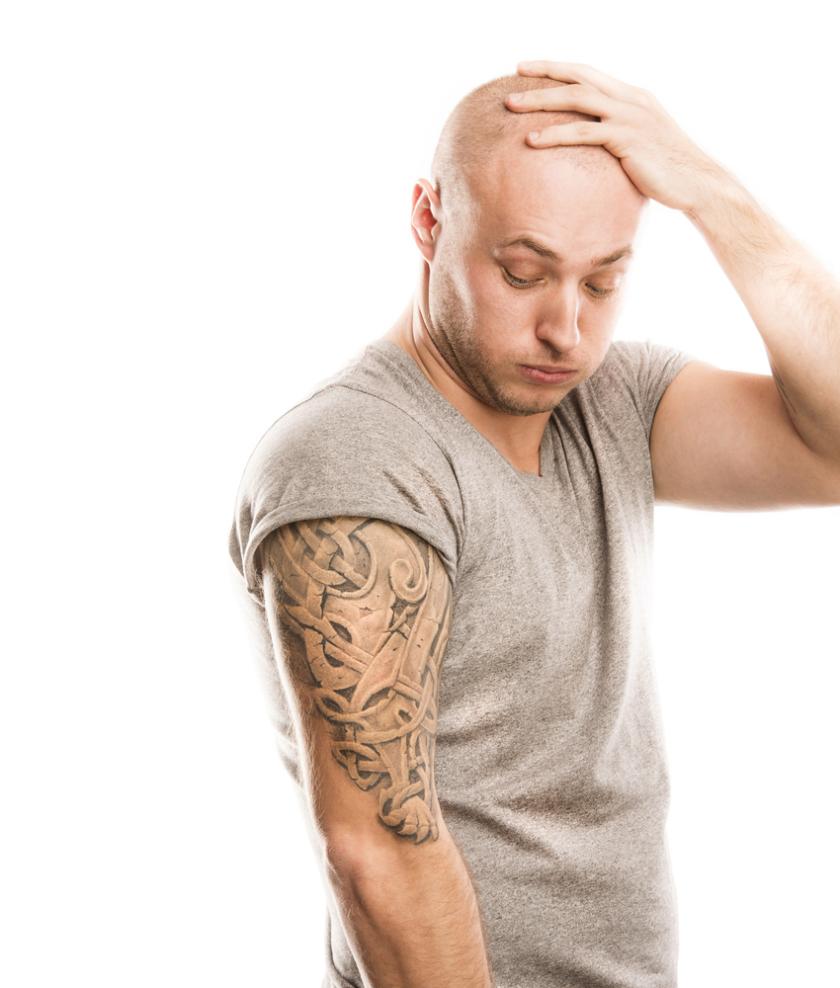 Getting a tattoo can be an exciting adventure. Hopefully it is one you embark on after careful reflection. Taking your time to decide about a design you can live with forever, researching and interviewing prospective artists and not rushing into it are key components of ensuring long-term satisfaction.

Far too many individuals get their tattoo on the spur of the moment, egged on by friends, or worse, after a few drinks (no legitimate artist would do a tattoo on someone who’s not completely sober). Over 35% of people showing up for their ink have thought about it for 24 hours or less – not a good thing.

If you decide to remove it in the future, laser removal is the only serious option – but it can be expensive and time-consuming. So, patience and preparation are key. That said, here are the 5 biggest mistakes to avoid. If you have already made one, our Toronto tattoo removal Doctors are here to help! 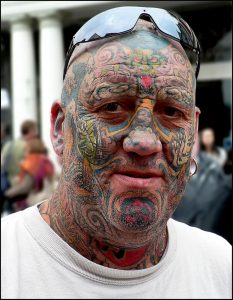 Toronto tattoo removal at the Baywood Clinic is safe and affordable.

No.1  Avoid tattoos of the face or neck.

Any face or neck tattoo needs to be really thought about carefully! It can limit your career and even romantic opportunities down the road. It’s virtually impossible to hide, and even if it fits your lifestyle right now, who knows what the future may bring. Socially this area is by far the least acceptable in mainstream workplaces and other environments.

Even those little tattoos behind the ear that are so popular right now can cause you problems. Remember, it may not only be your circle of friends that gets to judge you on your appearance. As unfair as it may seem, you may encounter others whose approval you need for career advancement who frown on facial or neck tattoos, or workplaces that strictly forbid them.

Our clinic once had a young man in his 20’s who as a teen got two Glock handguns tattooed on the side of his neck, with a string of bullets joining them It was related to some band he liked. He came for laser tattoo removal, because now in his 20’s he was holding a job at a major bank and always had to wear a full-up turtleneck shirt to hide them.

Worse he was about to meet his fiancées parents for the first time, and she was terrified that her religious parents might think worse of him. We were able to fade it enough over a few sessions that he could use a good cover-up makeup to get through the meetings. But he was in a panic for a few weeks! So, think twice, no, three or four times, before inking up your face or neck. 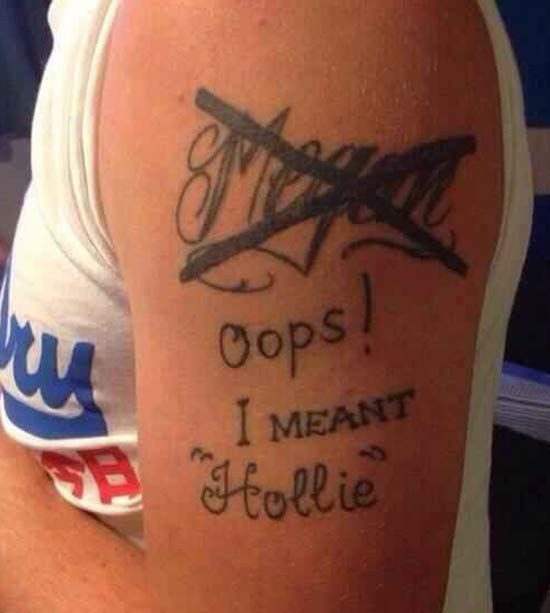 Names of former loved ones is a very common reason for Toronto tattoo removal.

No.2 The name of your Beloved

What could be more romantic than tattooing the name of your beloved onto your body forever? Lots of things – roses, boxes of candy, tickets to a Blue Jays game! That’s because one of the biggest reasons for laser tattoo removal and tattoo regret is having the name of an “ex” when the next Mr./Ms. Right comes along!

Every Spring at our Toronto laser removal clinic we see 10 -15 brides to be desperate to get their tattoos removed in a couple of months as their Summer weddings are approaching. Why? Because they are marrying “Billy”, but they have “Bobby” tattooed in 3-inch letters over their left shoulder! And lots of guys come in to – the construction worker whose wife told him he would be sleeping on the couch until he got his tattoo removed by laser. She was tired of waking up every morning to see his ex’s name, in 6-inch font, tattooed across his back.

Even worse, a girl of 15 (no legitimate artist would do this) who had “property of” and her ex tattooed across her breasts! So, as cool as it might seem, and as often as you see it on celebrities think hard about this. Love may last forever, but if it doesn’t you will be looking for a laser tattoo removal clinic! Just like that movie star! 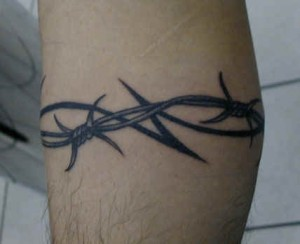 The out of date barbed wire is often seen at our Toronto tattoo removal clinic.

No. 3 A Tattoo destined to be a fad

Chinese Symbols? Barbed Wire? Peace Signs? So cool once! Now so 90’s, 80’s, 70’s, whatever! Try to avoid the new hot thing when choosing your tattoo. Yes, those first guys with barbed wire tattooed around their biceps were trailblazers, but now with a million barbed-wire tats out there it looks lame.

One of the main reasons we see patients for laser tattoo removal is their feeling they have outgrown their tattoo – in other words, it’s dated. So just because some celebrity has some new exotic foreign symbol on her neck in the latest reality show, doesn’t mean it’s for you.

Try and come up with an original design that means something deeply personal, or at least something that you can imagine being timeless. After all, what looks more dated than that 65-year-old ex-hippy Dad of yours with the peace sign on his chest? 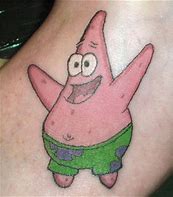 We love Patrick, and hate to see him go at our Toronto tattoo removal clinic.

No. 4 A Cartoon Character Tattoo

OMG! No, no, no! Yes, Porky Pig is so irreverent. Yes, the Road Runner speaks truth to power. Yes, Patrick is way cool on the Sponge Bob show. But trust us, a cartoon character is one you will come to regret. It’s just a guess, but it’s probably the type of tattoo (after the name of ex’s) most likely to drive you to laser tattoo removal after a few years.

We think of the lady who went to New Orleans for a Conference. After a few chilled drinks on Bourbon Street her friends convinced her to get that long desired tattoo of Pooh Bear, with the Hunny Jar! By the time she got back to Toronto, she realized her mistake. The same is true of tattoos we have seen over the years memorializing the Tasmanian Devil, Foghorn Leghorn, and any number of characters form MTV.

Cartoon characters may be a way to reconnect to your childhood years but do that by watching reruns on the Cartoon Channel, not tattooing one onto your body! See our Toronto tattoo removal Doctors for help.

No. 5 Tattoo of A Celebrity’s Face

Yes, it’s uncommon, but we have seen it at our Toronto laser tattoo removal clinic. There’s some celebrity you just love, and you want to demonstrate your fandom with a tattoo? Forget it! As we all know celebrities are flesh and blood. Right? Not only is it possible your tastes may change, and your admiration may fade, but the celebrity might end up a different person in 10 years.

Imagine you loved NFL football, and admired the Heisman and Hall of Famer O.J. Simpson back in the day. You get his face tattooed on your back! What could go wrong? Well, 25 years later you have one of the most controversial characters of the 20th Century advertised on your body. You did not bargain for that.

You also face the nuisance problem of every person on the beach asking you “Who the heck is that?” in 20 years when no one 10 years younger than you knows that it’s the lead guitarist of your favorite band emblazoning your chest! So, to avoid laser tattoo removal, avoid the celebrity. Stick to t-shirts.

So, try and avoid these major mistakes. You want your tattoo to last a lifetime. But if you have already slipped up and want to remove your tattoo, visit our Toronto laser removal clinic, and we can help you get rid of the error!